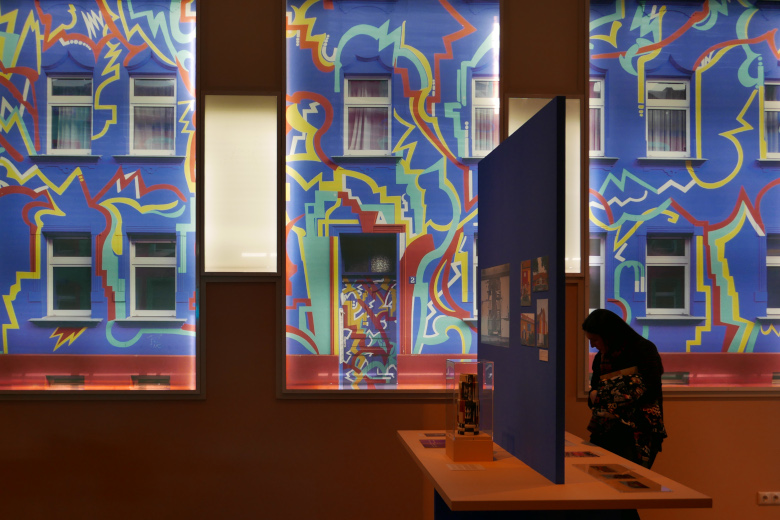 German architect and urban planner Bruno Taut (1880-1938) is well-known to many Germans, especially Berliners. In that city he created a whopping 10,000 apartments spread over twenty-three blocks, including the well-known Horseshoe estate and Uncle Tom’s Cabin. Taut was a representative of Neues Bauen and parallels can be drawn to the visions of Dutch architect Michel de Klerk, who built the celebrated Workers' Palace 'Het Schip' in Amsterdam in 1919.

In addition to social housing there is also a museum located in the building today. The exhibition ''Bruno Taut - Beyond Fantasy" can be seen in the museum until October 18, 2020. As an architect, Taut worked to create adequate housing for the many agricultural workers who moved to cities at the end of the 19th century. He paid particular attention to the effects of light and colour. In 1921, he was commissioned to help further develop the city of Magdeburg. Eighty building facades were painted according to his colour scheme, which gave the city the title 'Magdeburg the Colorful'. Colour also played an important part in his Berlin projects.

With the rise of National Socialism in Germany and after having returned from Moscow, Taut fled to Japan, where he wrote many books on Japanese culture and architecture.In 1936, Taut was offered a position as Professor of Architecture in Turkey, where he supported Atatürk's modernization projects and died two years later. Several of Taut’s Berlin buildings are now UNESCO World Heritage sites. In the Netherlands, he was the source of inspiration for the colourful Rainbow Neighbourhood in Almere. This fascinating exhibition at Museum Het Schip in Amsterdam is dedicated to his creative vision and projects, including the famous Glass Pavilion (pictured below) that he built in Cologne for the Werkbund Exhibition in 1914.