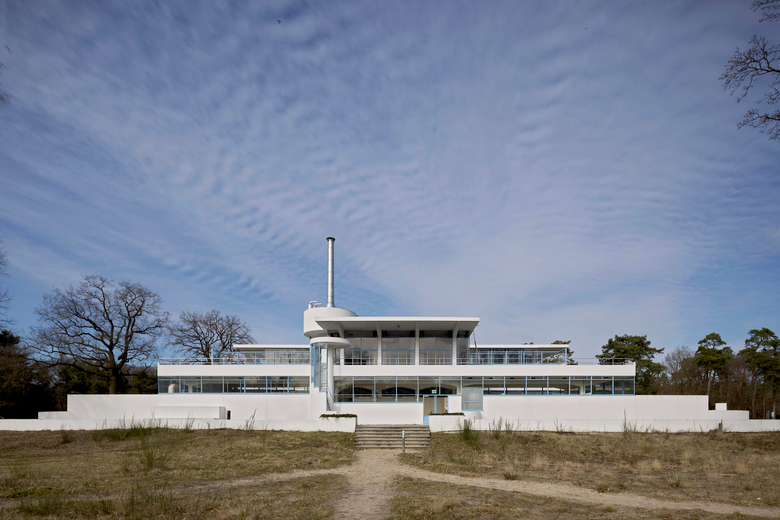 Zonnestraal, Ship on the heath

The former Zonnestraal sanatorium, located on the Hilversum heath, is a unique example of modernist architecture.

With its white concrete, blue steel, transparent glass and clean lines, it symbolises the hope for a better future. The complex is in strong contrast with the green surroundings, which also explains the nickname ‘Ship on the heath’.
Both the workers’ palace Het Schip (The Ship - 1919) and the ‘aftercare colony’ Zonnestraal (Sunbeam - 1928) were created as a result of an unequalled belief in progress. The architecture is radically different. Yet both buildings radiate the same ideals and are built on the foundations of private social involvement.

As with Het Schip, the initiative for Zonnestraal came from the labour movement. The General Dutch Diamond Workers Union (ANDB) was looking for solutions to the poor working conditions and the widespread tuberculosis epidemic. This meant that the union had a similar mission to that of the housing cooperatives: the improvement of the position of the worker.

The housing cooperatives found salvation in the Amsterdam School style, which emphasised privacy, the family’s own safe home. Zonnestraal sanatorium, with its abundance of glass and the blue steel frames, became the opposite: the style of the Modern Movement focused on bringing the healthy, natural surroundings indoors.
The history of Zonnestraal will be depicted by photos, posters, sculptures, scale models and many other objects.

This exhibition is made possible in collaboration with: