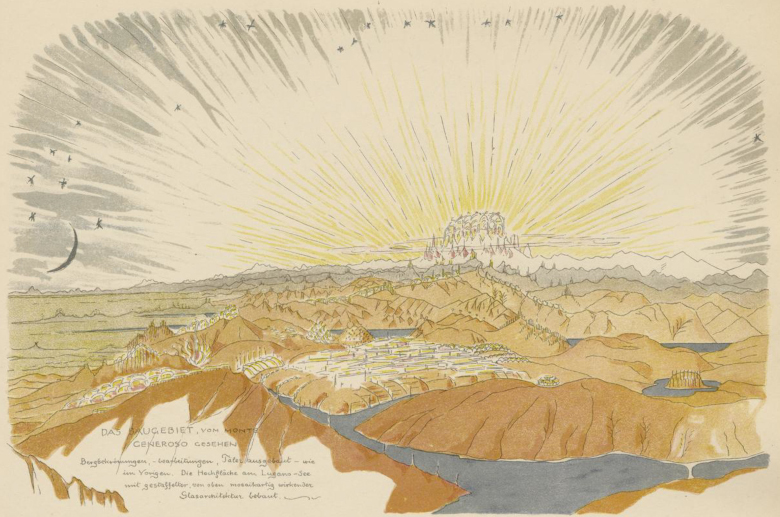 Translation of the preface from the Dutch exhibition catalogue

With the exhibition and the publication about the German utopist and designer of public housing Bruno Taut, continues the search of Museum Het Schip for the international context of the Amsterdam School. This German architect was a soul mate of Michel de Klerk. He had utopian views with a lot of fantasy and at the same time an urge to realize these fantasies in practice. The title "Beyond the fantasy" is in line with this. In addition to a phase of wild fantasies, he energetically built beautiful neighbourhoods for the working class.

Bruno Taut was born on May 4, 1880 in Königsberg, at that time East Prussia, nowadays Russia. He worked as an architect to offer decent housing to the many agricultural workers who moved to the cities as a result of industrialization at the end of the 19th century. We also find the same ideal among the architects of the Amsterdam School.

Taut visited the Netherlands regularly. He especially looked at the buildings of Michel de Klerk and Jacobus Johannes Pieter Oud, two architects for whom he had a great admiration. Taut was impressed by the modern architecture that was realized in the Netherlands at the beginning of the twentieth century. He made no distinction between the Amsterdam School, de Stijl and the tighter-like architecture around the modern Rotterdam architects around the movement De Opbouw. He saw these new buildings as interesting forms of Dutch modernity.

In 1914, Bruno Taut built his famous Glashuis that he made with the support of the glass industry for the Werkbund exhibition in Cologne. The pronounced expressionist glass building would go down in history as the most famous building of this exhibition. It is also set on one level with the brick expressionism of the Amsterdam School.

In 1912 and 1913 Bruno Taut was also involved in public housing projects in the Falkenberg district in Berlin and Reform district in Magdeburg. Due to the outbreak of the First World War, construction in Germany came to a standstill. At the time, Bruno Taut only realized a number of miners' homes in Katowice, in today's Poland.

In this period, he let his imagination run wild and published his utopian ideals such as Die Alpine Architektur and Die Stadtkrone. New cities were conceived in which crystal looking buildings reflected coloured light and many towers adorned the urban landscape.

In 1921, Bruno Taut became the city architect of Magdeburg and was commissioned to put this important trade center back on the map. The city suffered greatly during the war and there was little money. Together with artist Carl Krayl, Taut began to roll out a colour plan over the city to repaint old buildings with colourful paint. The colours he used were inspired by the medieval peasant culture in the nearby villages. In these villages, the streets were adorned with specific colourful paint: especially the figures carved in the wooden houses were painted.

Taut and Krayl tackled this in a greater way: entire facades and streets were set in these colours. The Spanish magazine Blanco y Negro reported that even the letterboxes were covered in wild coloured patterns and they wondered if it wouldn’t hurt the eyes of the citizens. Also the Dutch newspapers and magazines followed Taut's enthusiasm for colour with some suspicion.

In Berlin, Taut would continue with his colour experiments. Here he built more than 10,000 homes in a short time. Some of these neighbourhoods - Siedlungen - show Dutch influences. The Schillerpark, for example, is clearly related to the Amsterdam school and the design of the Carl Legien district is based on Tusschendijken in Rotterdam.

The rising fascism in Germany put an end to Taut's building activities. After working in Moscow for a year, he understood that he could not stay in Germany because of his left-wing ideals. In the night after the Reichstag fire (27 February 1933) he fled to Japan.

Here he has published beautiful books about the Japanese culture and architecture. Building in Japan was not easy for Taut. To build up an existence, Taut designed beautiful artisan utensils. He often integrated local traditions in his designs that were carried out by local craftsmen.

His friend Inoue had a shop in Ginza, a chic business district in Tokyo, where he sold these high-quality products. In 1935 or 1936, the father of the now world-famous Japanese architect Kengo Kuma purchased a polished, but unlacquered wooden box designed by Bruno Taut in the shop. He always kept the box carefully. From an early age, Kengo Kuma was fascinated by the beauty of the box, and it even inspired him to become an architect.

Just like Taut, Kuma is looking for a modern connection with local traditions, crafts and materials. Without being dogmatic, he likes to work with natural materials such as bamboo and wood that originates from the areas near the construction site. Where possible, Kuma also designs the interior and furniture as part of the building. Over the years, he has built a huge oeuvre of very diverse projects. No structure resembles another. It is special to experience that the ideas as we know them from Michel de Klerk and Bruno Taut, can also be found in Kuma’s work in a completely unique way.

In 1936, Taut was commissioned in Turkey, where the modernization wave was in full swing under the leadership of president Kemal Atatürk. Taut built a number of schools in Ankara as well as Istanbul. Furthermore, he built his own house in a fanciful Japanese pagoda style.
Bruno Taut died in Istanbul on December 24, 1938, at the age of 58. The Dutch architecture magazines and newspapers paid attention to his death and stretched his important role in the development of international architecture and urbanism.

Today, Taut still inspires us. In Berlin, a number of districts he designed have been designated as World Heritage Sites. Since 1995 a whole neighbourhood has been built in Almere, the Netherlands based on his views of the use of colour and urban development: the Regenboogbuurt (the Rainbow-neighbourhood).

With a renewed focus on Bruno Taut, Museum Het Schip wants to contribute to his revaluation in the Netherlands. It is time for Taut's fantasy to return in innovative, colourful Dutch projects in the field of public housing and urban planning.