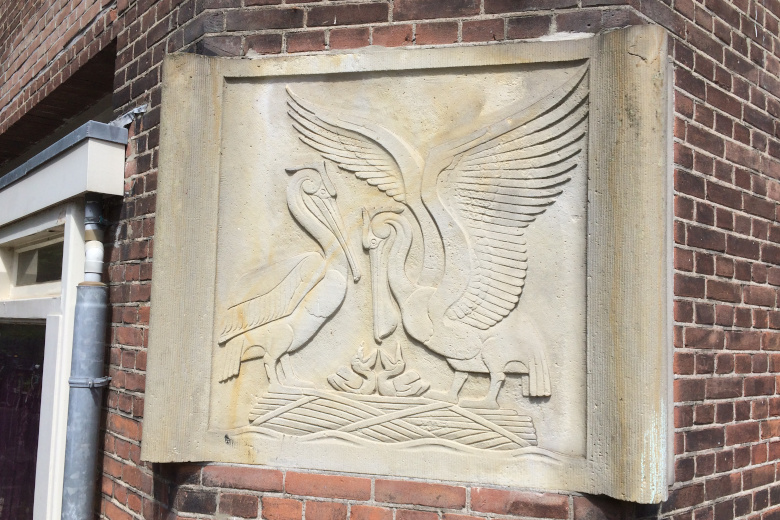 Museum Het Schip has included in its permanent collection a new work of art created by the artist Jaap Kaas. The artwork was donated by the Hildo Krop Museum in Steenwijk and is now on display in the Volkshuisvestingzaal.

The work of art is a relief made of plaster and has served as an example for a work of art to be executed at a housing project in Landlust in the Bos en Lommer district of Amsterdam West. In 1935, three artists were commissioned by the Amsterdam municipal art department to design facing bricks for a residential block by architect Piet Kramer on the Haarlemmerweg and the Gibraltarstraat. These houses were built in a very late simplified Amsterdam School style for a housing association, the Maatschappij ter Verkrijging van Eigen Woningen, nowadays better known as housing corporation De Key. Frits Sieger made a brick for the block of flats of a woman with a nursing child at her breast, with an apartment building and airplanes in the background. Jan Schultsz came up with a 'Parrot Couple' and a 'Squirrel Couple', while Jaap Kaas had made a representation from Greek mythology: 'the cleansing of the Augias Stable'. Kaas received some criticism about this design. The board of the housing association wondered what the performance had to do with housing. As a result, Kaas came up with an entirely new design. He then designed a gable stone with 'Feeding pelicans'. This sculpture fitted in well with his oeuvre because he made many designs of animals for Artis. Kaas told us about his new design that he had started from 'the idea that a nest creates associations with warmth and homeliness, while also bringing the material together and weaving twigs and belts into a solid whole is often used as a symbol for creating one's own home'. He chose pelicans because these animals - just like housing associations did with their homes - build their nests in swampy land, on the water's edge or even in the water. 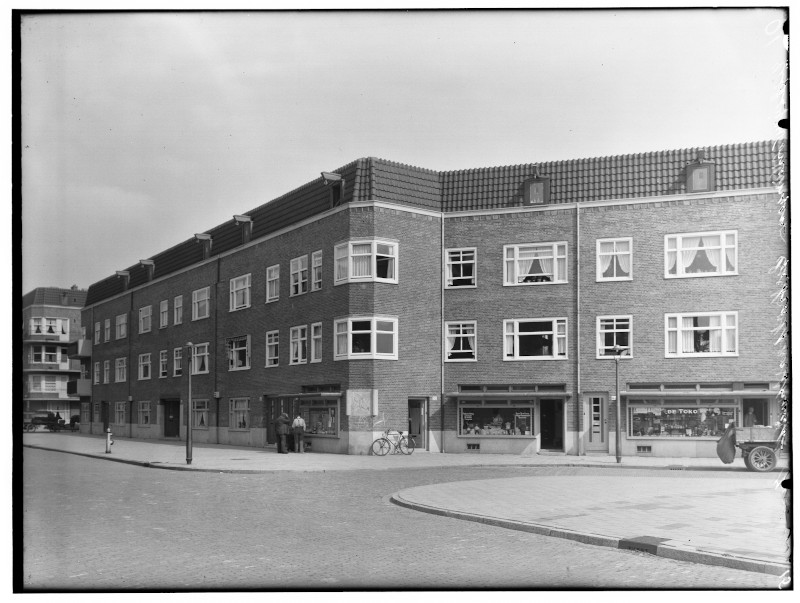 With this story he made the board of the housing association enthusiastic so that the work of art was executed in natural stone in 1936 and was given a prominent place on the corner of the little square on the Gibraltarstraat and the Van Gentstraat.

We don't know what happened to the plaster design after 1936. exactly What is certain is that the director of Museum Het Schip, Alice Roegholt, visited the former studio of Hildo Krop at the Plantage Muidergracht in 2002 and then took pictures of a large number of plaster sculptures with in between also the plaster facade stone of Jaap Kaas.

These plasters later ended up at the Hildo Krop Museum in Steenwijk. Because this museum mainly focuses on the work of Hildo Krop, the museum donated the plaster relief of Jaap Kaas to Museum Het Schip last year. Now it has a beautiful place in permanent exhibition about the Amsterdam School and the history of public housing. 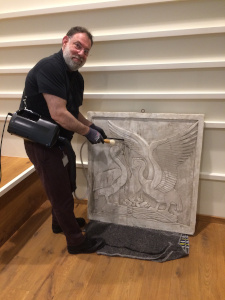 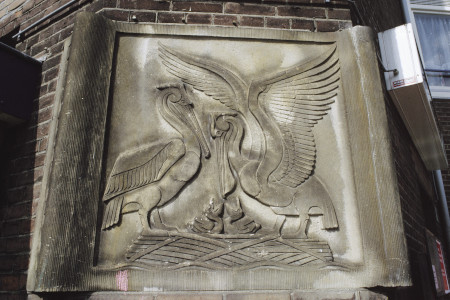 photo on the left: cleaning of the relief in Museum Het Ship May 2020

However, the question remains how a sculpture by Jaap Kaas ended up in Hildo Krop's studio. A possible explanation would be that 'the choppers' - as Hildo Krop's employees were sometimes called - carried out Jaap Kaas' design. This was very common because Hildo Krop had many employees and occasionally they were called upon by other artists. However, we do not have proof that the employees of Krop carried out the sculpture. A more probable explanation can be found in Jan Teeuwisse's 1987 book 'Life and work of sculptor-drawer Jaap Kaas'. In 1963 Kaas had to evacuate his studio in the Muiderpoort to make way for a municipal tax authority. He then had a much smaller studio next to Hildo's. Krop at the Muidergracht plantation. Because he didn't have enough storage space anymore, he subsequently smashed several plaster sculptures. The plaster of the Feeding Pelicans at least survived and eventually ended up in Hildo Krop's studio. How do we not know? Was it given to Hildo Krop by Kaas? Hildo Krop died on August 20, 1970 and Jaap Kaas on October 4, 1972. It will probably always remain a mystery.

With thanks to the Hildo Krop Museum in Steenwijk.